Bridge of Honor Snippet - Next Standard of Honor Backbone Novel 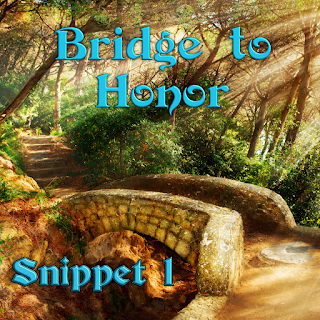 Time for a Saturday Snippet! This one is from the next Standard of Honor mainline book - Bridge to Honor. I hope you enjoy it - Zhanna and Dascha are having LOTS of adventure and action!

Remember - this is not edited and my change before publication!

The air was thick with perfume. Zhanna could smell some of her favorite flowers from back home, but there were other, more exotic odors that teased her nostrils and set her afire with curiosity. The smell was sweet, but the sad young woman was conscious that every day she was reminded that this was not home. Home but not home, the differences sometimes scraping her nerves like sharp fingernails down an open wound.

Here in the garden, she could sometimes forget the strangeness and the desperate need to adjust to a new world that she woke up with every morning and carried into her slumber at night. Here, the garden was quiet, and she could find peace.

Zhanna and her Familiar, Dascha, sat in the unusually warm sunlight on a bench near one of the ponds that had developed over the last couple weeks in her backyard. If she turned and looked closely, Zhanna could see the structure of her house from here. << How can I call it home, when it is so huge? Perhaps palace would be a better term. >>

<< Stop working yourself into a tizzy! My Witch, things have changed, but at least we are alive! >>

<< You are right, Dascha. I just feel like I’m a child in grown-up clothing, and pretty soon, everyone’s going to know that I’m not up to my responsibilities. >>

Zhanna felt the deep vibration of her Familiar’s purr. It was like an aural hug that communicated all of Dascha's love and belief. The weary young Witch relaxed into that sensation, treasuring the affection and letting the soothing sound of the resonant hum relax her tense muscles and enclose her in arms of peace.

Lost in that ease, Zhanna felt a sharp pang of danger and Dascha’s mental whisper of warning. The cat said, << Zhanna, be cautious and do not move quickly. Please stay calm and carefully open up your eyes. >>

Zhanna could never remember a time when Dascha had sounded so wary, even frightened. Even amid battle, her Familiar had never sounded this way. Unsure and terrified.

The young Witch carefully opened her eyes and began to straighten her spine. As her eyes started to focus, the surprising presence of a small creature directly in front of her yanked on her control like a runaway horse attempting to flee a horrific enemy. Blinking several times to clear her vision, Zhanna stared in amazement at what had to be an unknown species of Hidden Folk standing in front of her.

The small creature was less than 2 feet tall, with eyes of a glowing blue and with a striped pelt. Heavily furred, it would have looked cuddly like a child’s toy if it had not been armed with two wicked looking blades. One was a saw-toothed dagger that looked like a sword in the creature’s hands, while the other a triple-bladed stiletto. The paws that held them were rock steady, and the balanced stance told her that she was looking at a fighter.

Zhanna caught the eyes of the Hidden Folk in her own and saw buried fear and iron determination in the glowing orbs’ depth. Despite the characteristics that made Zhanna think of stuffed toys and dolls, she knew this creature was dangerous.

The silence dragged on until the young Witch regained her equilibrium enough to ask, “What is it that you seek? Also, why do you approach me with a show of deadly force?”

The shock of her speech drew an involuntary gasp from her Familiar and a startled blinking from her visible opponent.

Zhanna spoke mentally to Dascha, saying, << Dascha, I doubt if there is only one. If this were an assassin, they would have already hurt me. See if you can sense any other stranger in the area. >>

Still frozen in place, the would-be attacker and Zhanna kept gazing deeply into each other’s eyes. After a few seconds, Dascha answered her Witch, saying, << Three others. Two in the undergrowth to your right by the edge of the pond and one up on the left in a tree. The one in the tree appears to have a bow. >>

There was still no sound or reaction from the fighter standing within stabbing distance of Zhanna. Deciding that her response had shocked the Hidden Folk stranger, Zhanna tried one more time, asking, “What is it that you seek?”

Finally, the stranger responded, speaking in an understandable, high voice, “What sort of Witch are you? You do not stink of corruption like a Blood Mage. But you are not frightened and hiding like one of the Nature Witches that cower in order to survive.”

Startled in turn by the fact that the Hidden Folk spoke understandably, Zhanna answered as best she could, “I am Zhanna Artyrofna, a Witch of a different world and time. Unfortunately, I don’t know how magic users are classified in this world, so I cannot tell you what type I am in a manner that will make sense to you. Perhaps, if you explained the names of the different types of witches, I can be more informative.”

Dropping the blade tips down from a battle-ready position, the small creature took two steps closer to Zhanna. The two, stranger and Witch, were so close together that the young Witch could feel the air movement as the little one took a deep breath, inhaling her scent.

<< Zhanna, the Hidden Folk fighter is exhausted. If I didn’t know better, I would say that she is in battle shock. >>

<< I agree. I’ve seen too many others that have suffered from the same thing. >>

Spinning so abruptly that Zhanna almost shot to her feet, the small fighter turned toward the group that Dascha had identified near the pond shore and shouted, “Martya, she is not a Blood Mage. I am not sure what she is, but she has no stench of evil, and she has a Familiar.”

Zhanna took a breath in, partially in relief, and also to provide her the air necessary to speak when every word that she thought to say was erased from her brain as a terrified and exhausted young girl of no more than five crawled out of the underbrush and stood up.

Both Dascha and Zhanna watched in stunned amazement as the little girl scrambled to her feet, and charged toward the seated Witch, crying, “Please, please, help my Baba and the others. We have been hiding and running, and they have almost caught up with us. Baba has been hiding everyone so that the bad men cannot see us, but she is very tired. Please don’t let my Baba die too.”
------------- End of Snippet 01 -----------
Posted by Taki Drake at 3:11 PM 2 comments:

My short stories are on both Wenebojo and in Halloween Anthologies!

I really appreciate the fact that I have some of my short stories going up on the bookcast streaming service, Wenebojo. I had two episodes of Traditions of Childhood, from the Unfettered Mage series that were free for a day, and all of my stories that are in the three Halloween anthologies being rolled out within a month.

Being part of something that makes stories more accessible to people, irrespective of their ability to read quickly or challenges they might have hearing and seeing, is very rewarding.

I hope you have time to visit Wenebojo.com. I know that my readers that have signed up for the subscription service are delighted with it. Many of them have children or grandchildren and the license that allows four users at a time is very cost-effective for them.

We have been told that there will continue to be a free episode available leading up to Thanksgiving in the US. Instead of only having one day to experience the bookcast episode, the November-featured episodes and authors will be changed every other day.

Here is the video that Wenebojo just published and if you would like to see the anthologies, they are available on Amazon. They are Tricky Treats, Haunted Hearts, and Treated to Tricks.

Posted by Taki Drake at 3:36 PM No comments:

In plenty of time to enjoy before Halloween, the Phoenix Prime group has published a new anthology called Treated to Tricks. I am pleased to say that my story, Everyone Loves Halloween, is in there.

The stories that I write about contemporary life have been scattered among a large number of anthologies over the last few years. Later this year, I will be publishing a compendium of those for easy reading.

I hope that this tale is one of your favorite treats this Halloween. Look for a few more this month from me, as I get closer to finishing Unfamiliar Pathways! 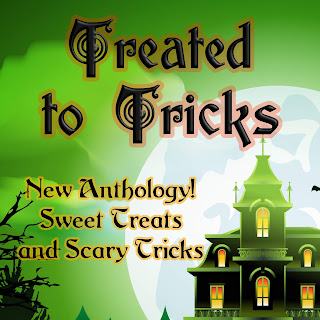 The anthology is available on Amazon and Amazon KU, and if you wish to learn more about it and the other great stories it contains, you can click to the page on this link.
Posted by Taki Drake at 9:21 AM No comments:

Traditions of Childhood is a standalone story in the Unfettered Mage series that takes place around the time of  Mage and Mate. I loved writing this tale about how traditions and ceremony to help anchor people in a new home.

Of course, not is all that it seems in what starts out as a loving gesture from a grandmother to her grandchildren. I hope that you will enjoy it! 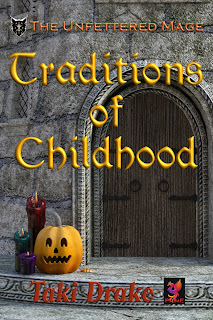 The book is available on Amazon and Amazon KU. To see more of it, click here.
Posted by Taki Drake at 9:09 AM No comments: