The next book in The Unfettered Mage series is in that last portion of production!! Thank you for all of the requests to release the next book. Since we are still a week away, I thought you might like a quick peek into what is coming, even if it is not edited yet!

-----------
“They Shall Not Win!” Once again, the universe seemed to pause for a split second. The two massive spells that had come before were not comparable to the power and passion behind this magical working.

Unanchored for a second, Ruth drew on every fiber of her being, on every stubborn part of her psyche, and poured her love, her anger, and every emotion that railed inside of her into one, massive spell. The heavens splintered and flashing death walked the land. Laser beams of colored lights flashed from watchtower to watchtower, buildings lit up as walls and windows went through some form of transformation. Even paths and roadways seem to be reforming, changing composition and structure.

The hills around the spaceport altered in obedience to the punishing light. Where they had been raw and unfinished-looking hills and mountains, they now appeared to be constructed emplacements. Polished and protected, armored and defended.

The road extended out from the spaceport in pristine splendor. Each side of the road contained a peculiar curb of honeycombed structures. This curb was short and intricately constructed. It formed an unique component to the way that would provide visibility no matter what lighting was available otherwise.

There was something subtly different about the air now inside the spaceport. None of the observers could tell what it was, but the change in feeling, the alteration in odor was significant.

Ruth turned to Drake and extended a shaking hand, her eyes wide and unseeing, her mouth trembling in exhaustion. He caught her up and clutched her next to his chest just as she lost the ability to stand on her own. Her weariness was draining. Even her toes ached. The dread that she had felt with the flash of foreknowledge had curdled the blood in her veins, and she had reacted passionately and emotionally. It had taken a toll that pushed her into exhaustion and close to collapse.

Yanking his gloves off, Drake quickly put both of his bare hands touching Ruth’s skin. The anchor and mage bond snapped into effect with an almost audible connection. Drake felt power pull into them from the surrounding harmonics of the planet of his birth, transmute to an energy form that then was pushed into his mage. He could see the color in her cheeks returning, the deep-seated exhaustion around her eyes dissipating. Her sagging exhaustion changed into a strong hug, both thanking him for the recovery and expressing affection.

They stood there entwined for a few moments before Ruth took a deep breath and straightened her spine to face what she had done.

They were surrounded by staring eyes and gaped mouths. Marine, workman, bodyguards. No one said a word. Drake could feel Ruth’s trembling as she tried to pull herself together. Staying within his supportive arms, she rotated in place and looked out at the spaceport.

Next Adult Coloring book in the Color Harbor Series will be released soon!! I am so very pleased to announce that the next coloring book is in QA. Look for it on the 24th, just in time for some serious relaxation over the weekend!
Here is a sneak peek at the cover! 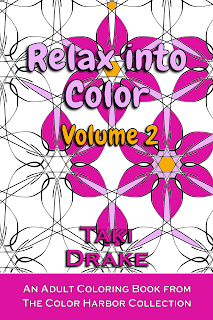 Posted by Taki Drake at 5:43 PM No comments:

I am very honored and pleased to have been included in the Phoenix Prime group which is currently busily stretching and changing the way that I have written my whole life. The program is a Ph.D. level 4-month long, intensive education into the core business of writing. It addresses not only how productive we are but all aspects of the business of being a writer. Directed at the indie author, this program has already seen members of the group quadruple their daily production, learn how to analyze the emotional content of the writing, and begin to understand some of the legal exposures of the career that we wish to succeed at. It is exhilarating, exhausting, and mind blowing! When you want to do something so badly that you get up in the middle of the night to write down ideas, when you forget to eat or drink for hours because you're creating a world to share, a dedication to your craft and to its reception becomes a driving force in your life. That is what the participants in the Phoenix Prime program are experiencing. The program is aptly named. Surviving this course will be difficult and rewarding. We will have come through fire and ash to rise again as stronger and better writers. More confident, better equipped, and more aware. Be kind to all of us in the Phoenix Prime program. We are fueled by coffee, slavishly attached to our laptops, and finding out just how unnecessary sleep might be. Look for a large number of publications from our group over the next few months. This will give you a view on the progress that we make before we can rise up and fly. 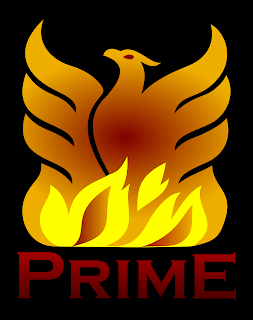