Another of the stories that readers have been requesting is the prequel series to A Learning Experience. The first book in the series, You Just Go On, is coming along nicely also. It is a dark tale that explains how Sephera came to be the person shown in the published story. It is a dark tale, and not for the faint of heart or spirit. The cover is designed, the editors ready, the writer frantically spinning the whirling gears of her mind... 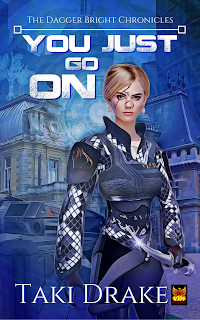 I will be posting snippets from this book soon. I hope you enjoy the sneak peek!
Posted by Taki Drake at 3:07 PM No comments:

Cover Reveal for the upcoming book, Fleet of the Mage!

The last chapters of the book are being completed in the next two weeks. Editors and beta readers are all lined up. The book that many of you have been nagging me about in this series will be published in the next week or so. While you're waiting, I thought it would be nice to show you the cover. 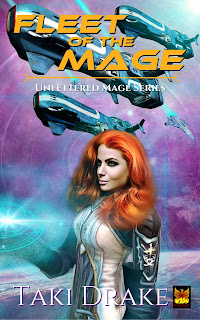 This story takes off where the first book in the series, We Are Not Prey, ends. Ruth begins to build her new life on the planet Arkken with her Mage Anchor, Pawlik. It is a time of political unrest and machinations for the planet, and the inhabitants of Borachland Castle find themselves directly in the middle of the chaos and confusion.

Moving ahead with her objective of organizing her inherited fleet into something that offers hope and a sense of purpose to her rescued fellow slaves, Ruth is confronted with the need to create a Space Navy from the ground up.

The changes in her life are daunting, the challenge is immense. How will the unfettered mage fair in this universe and culture so far away from what she is known for her whole life?
Posted by Taki Drake at 9:17 AM 4 comments: