The Federal Witch series is one of my favorite guilty pleasures. You can imagine how excited I was about the idea of writing a cookbook in the series. The resulting cookbook is a start of a new type of publication for me. It marks the advent of the combination of recipes and stories where the recipe book itself is the main component. The stories are illustrative of recipe aspects and use.

In this cookbook, the matriarch of the Blackmore family provides a central theme. Marcella is an earth witch, eating primarily vegan or vegetarian meals. The recipes in this cookbook reflect that.

Although there is one recipe in the book that is not based on vegan or vegetarian diets, it is primarily directed at those people that do not eat animal protein. The sole exception is the recipe for the dog and cat treats. This was done deliberately since many animals require a fair amount of concentrated protein for health.

The author of the Federal Witch Series, TS Paul, cheerfully collaborated with me for the cookbook. Both of us contributed recipes and a story, making an interesting blend of culinary and writing styles. It is available on Amazon, both for purchase and for KindleUnlimited. 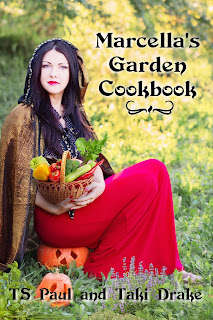 We hope you enjoy the cookbook and the stories. Look for more of both within the next few weeks.