Familiar Shadows is out!

“Meow! You have to be the most rebellious, stupid, idiotic kitten that I have ever had to raise or know!”

“Hiss-hiss! That just says that you’ve made a poor selection ofthe cats that you decide to know. Either that or you always pick complacent stupid cats,” retorted the young cat with flashing green eyes. Her fur was fluffed out, making her look three times the size that she actually was. At this moment, her face was twisted into a threatening snarl, and her fangs were showing.

The older cat, a majestic full-bodied feline with black and gold markings was equally angry. His anger was expressed more in his flattened years and crouched body. The casual observer would’ve thought that they were just seconds away from a full battle. That observer would not have been far from correct.

“All the other cats in our family line have been familiars! You come from a long line of magical cats, strong in their ability to channel, intelligent and brave. Why can you not see that this is the way we are supposed to be? What is it that is not clear to you?” the male flung in a yelling voice.

“Just because you live your life structured with ‘shoulds’ doesn’t mean that everybody has to. You say familiar, but to me, it looks more like a slave!”

“How dare you? No cat of our family has ever been a slave!”

“All I can do is observe how you behave. Nobody ever explains anything. You force every one of us to learn in our own way and so nothing gets carried down. If we really were a family line, then more would be taught, rather than forced on us.”

Crooking her tail overhead with a sharp bend, the small female cat leaped off the small ledge that she had been standing on and stalked out of the small, constructed shed. Carefully, she avoided the ramps and climbing posts that were scattered all over the chamber. With the ease of long familiarity, she avoided looking at any of the dangling feathers and tufts of fur that were there for play.

The last thing she wanted to do was to lose her position, lose her moral advantage, and get distracted by a stuffed mouse.

<< If he tells me one more time what a wonderful line we come from or how magical everyone is, I think I’m going to spit up a hairball! I am so tired of this! Why on earth should I be a slave to some stupid human? >>


The new book in the Standard of Honor Series is out! 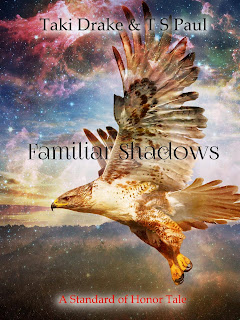 Learn how Dascha and Zhanna started their relationship!
Posted by Taki Drake at 9:24 AM