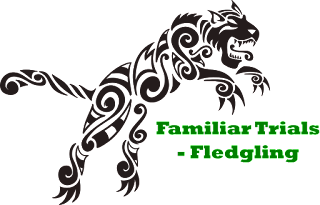 This book in the world of the Federal Witch is one of those in final construction and editing right now. It is titled Familiar Trials - Fledgling and tells a story about Zhanna's familiar, Dascha. I hope that you enjoy it!


There was no warning. The blow that compressed her body and made it impossible to breathe arrived with no betraying sound, no visual clue. Dascha was stunned into momentary paralysis. Her body hung limply, and her mind spun around her skull in confusion. She could feel her fur rippling as she was lifted up into the air. The small cat was helpless and afraid.

There were too many things that she had experienced before for her to stay coherent. Even though the talons of the bird held her firmly and without injury, Dascha could once again feel those earlier talons that had pierced her body and had caused her to bleed so badly that she had almost died. All of the fear and pain that she had felt on that long-ago day crashed into her mind, momentarily overwhelming her ability to think and plan.

Only a split second had elapsed when she moved past her stunned amazement. << Not this crap again! What is with these blasted birds? >> she thought as she twisted her lithe body into action. There was no way she was going down without a fight.

Stretching as far as she could, the small black cat attempted to sink her claws into the legs of the bird that held her. In the back of her mind, she was surprised that she knew it was a bird. There were flying reptiles and other things that were capable of swooping down and grabbing her, but she had known instantaneously that it was a bird.

It was all up to her. There would be no rescue from this attack. No flying savior. She needs to be able to do this for herself.

Spitting and yelling at the top of her lungs, Dascha was stopped cold by an amused comment from her captor.

<< You need to build up a little bit more muscle before that’s going to work. >>

<< Because we need to talk and you don’t exactly get email, do you? >>

<< You could have just had Henley call Zhanna, you know. >>

Dascha turned that over in her mind for a short while, thinking through the ramifications and possible meanings for the things that Glenfrey had left unsaid. She noticed that the steppe eagle had begun to land on a rocky outcropping and held her questions until they were settled on the ground and she could regain her feet.

Standing up and walking on slightly shaky legs after Glenfrey had released her, the small black cat seated herself about 3 feet away from her friend. Carefully wrapping her tail around her paws, she looked over at the huge bird and waited for him to talk. The time she had spent with Glenfrey and his witch, Henley, had taught her that attempting to hurry the bird would simply lead to additional delays.

Shaking his wings out and then settling him across his back, Glenfrey brought first one eye and then the other to bear on Dascha. Of all the things that she could have thought that he would say, what came from him next was so far down her list that it didn’t even appear.

<< Why have you not joined the gathering? Are you not going to the trials? >>

<< The Familiar Trials. The ones starting soon. Everyone is gathering by the gateway without you.
Did the other familiars not tell you about this? >>

<< Glenfrey, there are no other familiars with any of the witches in the village or even in the villages around where Zhanna lives. >>

The large bird considered what she had said. His thoughts came slowly back, << No familiars. That sounds like it is a bigger problem than I thought. >>

<< I thought perhaps that you had managed to annoy the other familiars to the point that they weren’t telling you or bringing you to the trials. After all, you do have a bit of a mouth on you. >>

<< Ha! Who was the person who wanted to teach me how to be snarky? I’m simply applying the lessons that I’ve learned. >>

Glenfrey totally ignored her retort, instead choosing to answer a different question.
<< We can explore the whole issue of why there are so few familiars later. However, we need to hurry if you’re going to make it back to the gateway before it opens and closes. >>

Dascha stared at her friend. He was not fidgeting, he was not looking sleepy and inscrutable. In fact, as best she could read the expression of a different species, he looked concerned and perhaps even a bit worried.

<< What are the trials, Glenfrey? And why do you look worried? >>

<< The trials are how familiars get training and establish rank. They only happen sporadically, and there are a good bunch of instructors for this one. >>

The young cat watched as the eagle started to move uneasily from foot to foot. Deciding that she would not subject him to a cross-examination, Dascha simply asked, << How long do they last? And what do I tell my witch about why am leaving? >>

<< I just tell Henley that I need to go to a meeting of familiars so that my training can be kept up-to-date. He has no problems with that, and you can always tell Zhanna to call him if she wants more information. >>

Dascha had adamantly refused to leave without telling Zhanna in person what she was doing. The flight back to Zhanna’s house was made quickly. Even so, Glenfrey had gotten more nervous and irritable during the trip. Dascha knew something else was going on but wasn’t exactly sure how to bring the subject up again.

Glenfrey landed heavily on a fence post that was part of the boundary to the garden of Zhanna’s grandmother. The older woman had been weeding the garden as they arrived. With no sign of nervousness or fear, she moved over to confront the eagle.

Standing less than a foot away from the dangerous beak of the large predator, the small but sturdily built woman gazed deeply into the eagle’s eyes. She held that gaze for just a moment before a slight smile appeared on her face, and she turned to address Dascha.

“We had better go talk to her right now. You will have to hurry to be on time.”

Now completely confused, Dascha followed the older woman into the house and through the hall to the large kitchen. Zhanna was seated at the kitchen table with books opened up in front of her and an intent look on her face. Hearing her grandmother’s footsteps, she looked up with a smile.

“I am almost done with my homework, Baba. Do you want me to help with supper?”

“Not yet, dear. I still have weeding to finish, but I think that Dascha needs to talk to you first.”

The young witch looked startled. Her eyes flew to her familiar, and she immediately went down on her knees reaching a hand out to the cat. << Is something the matter, Dascha? You could’ve called me, and I would’ve come! >>

<< No, everything is all right. Glenfrey came to tell me that I need to go to a meeting and it is one that I didn’t know about before now. I might need to be gone for several days, and I didn’t want you to worry. >>

Zhanna’s eyes grew a little bit wider, and her expression shifted to deeper alarm. << Is it something I did? Are you in trouble? >>

<< I’m not in trouble, at least that I know of. Well, unless you count the mice that I dropped into that mean girl’s bag at school. >>

<< You did that? Boy, was she mad. She screamed and ran and then was embarrassed. I hope that she doesn’t find out it was you. >>

In the background, there was a smothered laugh from the older woman, but Zhanna was focused on her familiar and ignored her grandmother.

<< Glenfrey says that you could call Henley if you’re worried about it but that it’s just something that happens once or twice a year. I think he really wants me to go because I’m so new at this and there are no other familiars in the village. >>

A wave of love and acceptance exploded from Zhanna through the familiar bond. Dascha felt like she was gently held and petted. She could feel the edge of worry underneath that wave that was Zhanna’s feeling of her own inadequacies in their partnership. Sending a mental purr back at her witch, the familiar tried wordlessly to reassure the person that she loved above all others of her faith and devotion.

The trembling smile that showed on Zhanna’s face was the only thanks that Dascha needed.