Snippet from Familiar Travels - Just to keep you out of withdrawal!!

Warning! THIS IS UNEDITED!!

It was no more than a split second, but the gate covered an immense distance before TT’s paws hit the ground in the back of Monet’s garden. The idea that the famous painter had created his beautiful florals from flowers that were nurtured by the magical energy of the portal, amused TT to no end. It seemed like it a hidden joke, something that added a special dimension to those famous paintings. TT had heard people discuss the painter’s work in her mistress’ salon, attributing the luminescent light to the painter’s exceptional skills. Only now did TT understand that Monet had painted his vision of magic.

Normally, the flower garden filled her with peace and a sense of elegance. Right now, every step that she took to the gate seemed to drag on her spirit. She was desperately, overwhelmingly frightened.

She could see two dark shapes waiting right outside of the gate. The garden was closed now, but she and the ferret had no problem navigating through the deserted garden and sliding through the small gaps of the gate. Truth be told, TT was a little envious that the elderly professor had come to meet his own familiar. He walked with a cane and was wrinkled and very slow, but his pleasure at seeing his Familiar was unmistakable.

Despite the ferret’s age, he scampered up the outstretched arm of his witch and made chittering, happy sounds as they greeted one another. The old witch’s shaking hands gently patted his familiar and TT could almost feel the contentment that surged up as they basked in the pleasure of being together again.

Concealing a bracing breath, she turned toward the driver and the open automobile door that waited for her. She knew that her witch would not come to pick her up. That was not how proper behavior was handled in a witch-familiar relationship of such a noble house. Instead, a very proper driver was there, dressed in his livery and standing with impeccable posture. The door was opened for her, and he stood at attention waiting for TT to ascend into the car.

Normally imperturbable, the driver actually stepped back in shock when he saw the white cat coming toward him. "Sacre bleu! What has happened to you? This is a disaster!” he said, waving his hands in the air.

The shock on his ordinarily stone-like face cut TT to the bone. She felt like she was having the skin peeled off of her flesh sliver by sliver. Her witch had everyone trained to perfection and for him to break training like this meant she really was horrible. She had looked at herself in the water, and it had not seemed that bad, but maybe she just wasn’t looking at the right place. Dascha didn’t seem to care, in fact, Stinky and Jack and all the rest of them didn’t really seem to mind that she had been hurt. They had protected her at the risk of their own lives, and she felt a little bit of warmth deep in her heart just thinking about that.

The driver had regained his composure. Once again, he looked like the perfect emotionless automaton. Holding the door for her, he backed up and waited for her to enter. Reluctantly, TT jumped up on the seat, cringing internally as she saw the faint smudges of dirt from her tracks that were left on the pristine leather upholstery. Somehow, she knew that is soon she was out of the vehicle, that the chauffeur would be scrubbing the seat. It would not do for anything to be less than immaculate for Madame Rosemary d’ Reauvrey, the premier Witch of Paris.

The white cat was so caught in misery that she wasn’t even conscious when they arrived home. Only the stopping of the vehicle and the almost silent opening of the door brought her back to the present. TT had been lost in reverie the whole time, thinking about many things. Her family, the way she was raised, the different way that they regarded being a familiar than what had been taught at the Trials.
With that ache so sharp that it felt like it was cutting into her, TT missed her friends. With them, she was accepted and felt safe. Right now, she was not safe at all. At some level of her mind, the Persian knew that she was walking into a very risky and dangerous situation. If she could have just explained why she knew that, maybe the homecoming would’ve been different.

Reminded of her surroundings once more by the soft throat-clearing of the chauffeur, TT gathered her shreds of dignity around her and jumped out of the vehicle and started walking up the steps. Remember how she had pranced up and down the steps with her tail flipping in the air, proud to be the jeweled familiar of such a highborn and powerful witch, TT could not reconcile the cat she had been the week before and who she was now.

As the small white cat approached the front door, it opened. As usual, one of the footmen tended to the door under the supervision of the Butler. There was no laxness allowed in her witch’s home. No failure to perform or inexpert execution. Everything had to be done perfectly.

Looking at the people around her, TT felt like they were not real. Instead, they were a mirror of perfection that would only reflect things that were flawless. She felt alienated and not included, no longer unmarred. The next few minutes of her life were going to be some of the hardest ones that she had ever experienced. However, she had survived the Familiar Trials, and she was on her way to learning a lot more about herself and what power she owned. There was nothing to do but go forward right now.

As TT moved toward the solarium that was the usual place for her witch to be at this time of day, she saw from the corner of her eyes the look of dismay and horror on the face of the Butler. That look was echoed on the even less controlled visage of one of the maids that happen to catch sight of her as the cat walked back toward the solarium. There was no concern, no empathy in those looks. Just unmitigated dismay with overtures of disgust. Had she really been that shallow before? Was it something that she had been raised to believe or something she had inside of her? Only time would tell. 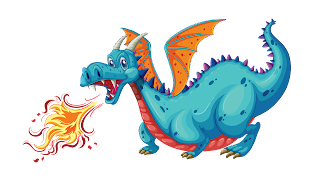 The next book in the Familiar Magic series follows the Familiar Trials - Fledgling book. It tells the story of TT, the Persian cat from that book as she returns home. It is an emotional book of trial and triumph, and hopefully, one that will address the hundreds of emails I am getting begging for the rest of that story. I will not say that this is the "rest" but it continues the tale, and I hope that you will be pulled back into my world of magic, familiars, and adventure!

A new Familiar will be making his debut in this story, TT's Uncle Jochar. I thought you might like to see him as a sneak peek! 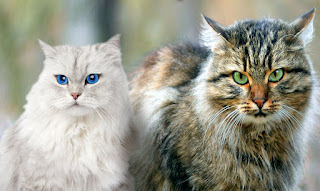 The book will be out no later than this weekend! Stay tuned!
Posted by Taki Drake at 5:49 AM No comments:

This year, all of the Phoenix Prime authors are trying to create merchandise that represents aspects of our publications. I was at a bit of a loss but came up with a few things that I would buy because they remind me of the book. As a STEM professional and as a writer, I am always drinking coffee, tea, and water. So it seemed reasonable that I would create mugs.

Because of the Badger Hole Bar, I did a coffee mug and a beer mug. And since I hate wet desktops, I did coasters. It was an exercise in art, which is NOT my strong suit. However, I found it fun and am beginning to think that this 'publish a book - give people options for cool stuff' idea might not be so bad after all!

Tell me what you think, please! Remember though, I am NOT AN ARTIST. 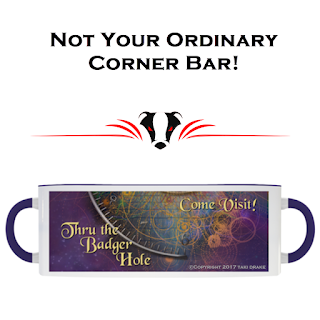 I know that it is silly, but the first thing I did was to go buy them. At this rate, I will have lots of mugs by the end of the year! The BHB is projected to have LOTS of books per year for the next few.

Posted by Taki Drake at 8:55 AM No comments:

Thru the Badger Hole - Just Released!

I am happy to announce that the book, Thru the Badger Hole, has been released. I've been working on this book and the concepts around the series for about six months now. With fantastic assistance from the rest of the Phoenix Prime group, we have laid out a story arc that would amaze most authors.

This first book lays the foundation for the universe and positions it for continuing adventures and development in the rest of the main storyline. Along the way, there are literally over 100 outliers, novels, cookbooks, etc., that have been planned and outlined.

Obviously, I will not be writing all of them myself. Instead, I will have co-writers and contributors that help make this universe a rich and intriguing one with multiple points of view and a strong overall storyline.
I really hope that you will enjoy this book. Over the next three weeks, there will be a minimum of three other book releases in this universe. Please let me know who are your favorite characters and why. I just might sneak you a few snippets here and there to let you know how they're doing.

This is going to be fun! 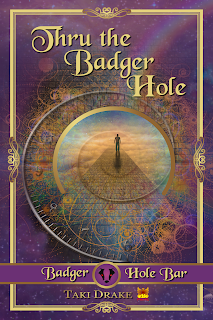