My Cyber Music story is in a new Anthology!

The third CyberWar anthology is out and I have the second in the CyberMusic series in it! I am really getting to love the two main characters in this series.

Part of that is that it combines my other work in computer analysis and security with my alternative life in fiction. I believe that is why they seem so real to me.

Hopefully, when the next CyberWar comes out I will have time to do another story in the series for that one! I have other things on the priority list before then though. I have the next Unfettered Mage book, Fleet Genesis, in the works, a couple of holiday season short stories for anthologies coming out in the next few weeks. Also, a new Familiar Magic book called Unfamiliar Passage and two books in the Badger Hole Bar!

I have been working on them in pieces, but have some time to really concentrate, so expect a few publications to brighten up the rainy fall days! 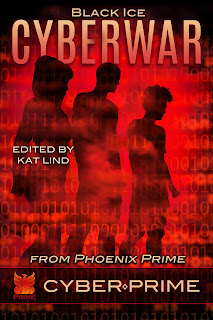 The book is available on Amazon and the stories are going to be available in other forms within the next few months.
Posted by Taki Drake at 4:57 PM No comments:

Work is rolling along on the next Unfettered Mage book, Fleet Genesis. Here is a small snippet for your enjoyment. As usual, remember that this is not edited!!

<< What? What’s the problem? >> grouched the man, resenting the interruption of a pleasant dream.

The telepathic touch of his AI weapon finally registered, sending a cold chill down the former Marine’s spine and bringing him to full alert. It had been a decade since he had felt that sort of urgency from the intelligent gun that was his constant companion. He wasted only a brief flash of regret on that memory, having long ago come to his peace with his altered circumstances.

<< There are people approaching, and the pattern of their movement says that they are not friends. >>

Old patterns reappear under moments of stress and Alan was no different than the rest of his old unit. << Report! >> he demanded.

<< Approximately five minutes ago, two vehicles approached our property. One of them stayed at the end of the drive and remains closed up. The other came halfway down the driveway, and a squad in loosely disciplined order spread from the vehicle leaving the driver inside. >>

<< Are there other signs of activity? >> Alan knew that the capabilities of the new weapon that housed his old friend included some features that hadn’t been fully explored by the two of them. The old soldier knew that that was really his fault. Arturis, the AI, had tried to share his enthusiasm for his new home, but Alan had sunk so far into despair that he couldn’t manufacture the energy.

Quickly, the AI detailed the invaders’ set up of an observer post within the clump of trees closest to the house and their concealment of manacles in a bag that two men were now carrying toward the front door.

Grunting in effort, Alan swung himself into his motorized wheelchair and strapped the safety restraint across his waist. His mind was working furiously as he considered options, but could not find a clear course of action. Quickly, he asked his companion, << Do you have any suggestions? I can’t think of a defensible position here. >>

The AI’s mental voice was hesitant as he said, << You know that I have been playing a little bit with the upgraded capabilities that we have since Archmage Ruth replaced the old gun. >>

At Allen’s acknowledgment, Arturis continued, << Some of those capabilities allow me to monitor and set up other units. Since you have been sleeping so much, I’ve been amusing myself by exploring the things that I can do. Some of your old unit members, both biological and AI, have been generous in supplying items for me to play with. >>

<< Stop worrying about whether I’m going to approve, and just tell me what options we have! We can argue about it later, but you know as well as I do that I’ve just been crawling into a hole. You shouldn’t feel responsible for that. It is my own cowardice, not yours. >>

Alan knew that the AI wanted to reassure him that it wasn’t cowardice, but the old soldier knew that he had been shutting down. He could feel the exact moment when Arturis decided to cut to the chase. The AI went back into reporting mode as he said, << I placed observational units that are very small around our property. I also deployed some perimeter defenses that are not individually very powerful but in aggregate will be a deterrent. Additionally, the perimeter of the house is guarded by stronger armor and weapons. >>

The wheelchair-bound former soldier felt an energizing wash of power run through him, and he sat up straighter in his motorized vehicle. An unfamiliar expression stretched his face, and he was surprised to realize that he was smiling.

<< Activate whatever passive protections that we have. Bring any weapons online that we need but don’t fire until they reveal their intentions. >>

<< Done. I don’t think we are going have to wait long since they are climbing the porch steps right now. >>

Alan sent his wheelchair toward his front door while slipping his gun into his left hand. He was almost at the door when the hollow reverberation of strong knocks echoed through his mostly empty hallway.

Alan chose not to answer that preemptory sound and waited for a moment. He heard the murmur of conversation on the outside of the door but could not make out any specific words. Arturis said over their bond, << One of them wants to break in through the window, the other wants you to position yourself right by the door so they can take you out quickly. Apparently, they are after me, but they have orders not to kill you. >>

A sharp stab of fury brought a snarl to the retired soldier's face as the threat to his companion did what no concern of his own danger would ever have done. The man who had been the leader of the planetary Marines for over a decade, commanding from the front lines, was on the edge of going berserk. Every one of his protective instincts had kicked in and what had been a mild challenge was now something far more severe.

“Maj. Culhane, the Council commands your appearance. You are directed to come with us, so please open the door.”

Arturis murmured, << That is the senior of the two. He probably thinks that we have a camera on the door because he is waving a fancy document in the air in front of it as if we were stupid enough to fall for that. >>

The snarl on the major’s face became a little more amused as he answered out loud, “I think you are confused, sir. I do not live in the town ruled by the Council, and I am no longer a member of the military under their command. In fact, since they disbanded the Navy, they have no military to command.”

Another voice intruded, snarling contemptuously, “You may have been important many years ago, old man, but now you have to obey your betters. Open this damn door or we will break it down.”

The angry voice from outside continued at a shouting level, “They won’t do you any good, because we are going to have you gone before then. So open up the damn door and maybe we won’t kill you.”

Arturis said, << All defenses are now on active mode, and the weapons on the perimeter are live. Do you want to direct them? >>

<< You’re the one who’s been playing with them, not me. Don’t respond with deadly force unless they do something outrageous. Then let’s figure out what we are going to do because these jerks have seriously annoyed me! >>

In a private part of his mind, Arturis thought to himself, I suppose it is reprehensible of me, but I can’t help but be glad for the stupidity of these two. And the idiocy of whoever ordered them here. If I would’ve known long ago that attacking us would bring Alan out of depression, I would’ve engineered it myself.

No whisper of that came through their bond, and the old soldier was not interrupted as he listened to the forces outside start to deploy. The low hum of a force field could be felt in the hallway as the house’s defenses became active and ratcheted up. Curses from the two men on the porch started suddenly as small, and irritating shock attacks began to force their retreat from the house’s foundation.

Trusting his longtime companion, Major Alan Culhane (retired) set about planning the downfall of his enemies with a smile and reenergized appreciation for life.

My Story is in an Anthology!

I got involved in a writers' game where we were given a snippet, a character, or a scene to incorporate in a story of our choice. I got a weird one and went WAAAAYY outside of my normal writing venues.

It is called Destinations and has been published in an anthology called The Hand You Were Dealt. If you have a chance to read the book, please let me know what you think of the story and if you think it is worth continuing as an occasional short story series.

I like the idea of taxicabs as the hand of justice...

Anyway - here is the cover and link. The stories are all fun and it was a challenge that really sparked the creative juices! 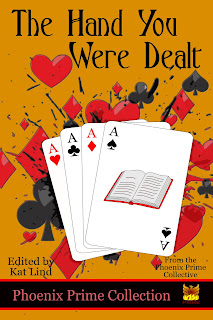 It is available on Amazon.
Posted by Taki Drake at 5:43 PM No comments:

The Journey of Zhanna and Dascha Continues!

Coping with tremendous changes in her life, Zhanna is driven far from the comfort of known surroundings. Many would buckle under the weight, but the young woman is up to the challenge.

Join the Russian Witch and her Familiar, Dascha as they tackle another call!

Road to Honor, available on Amazon!
Posted by Taki Drake at 11:44 AM No comments: