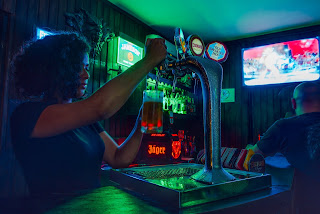 The book is getting closer to done! I pleased with the progress and hoping to get this out in the next 10-14 days! In the meantime, here is another snippet!

Remember, this is not edited!!

It had been a short drive to the Marine bar known as ForceX. The drinking establishment had been the first place that Ruth had planned on visiting when she landed on the planet. It was here that she had returned the effects of Sarge Brandark, the man who had sacrificed himself on the slave ship to allow her to live.

Holding Sarge’s wake there had led to other significant events in the short time that the Mage had been on the planet Arkken. If Ruth could’ve called anyone on the world an ally, she would’ve used that term to describe the bartender at the ForceX Bar.

Luka Grission was not just the bartender, he was part-owner of the drinking establishment itself. Tied tightly into both active and former military circles, he was a good source of information, and both Pawlik and Ruth valued him as a person of honor.

That was why Ruth was there.

Pawlik had gone out to another meeting with some of his political contacts, leaving the Mage at loose ends. While the nobleman was gone, a message had been brought in tagged for Ruth’s attention. It was a note from Luka, saying that he had some crucial topics to discuss with her and hoped that she would be able to stop by within the next day or so.

Of course, she’d been ready to take off immediately. Her security detail put their collective foot down and insisted that she wait for them to prepare. Jenna resisted all blandishments and took the time to assemble a security detail. Ruth fussed and fumed, but the delay wasn’t that long. By the time they took off from Borachland Castle, it was still less than an hour between Ruth getting the message and their shuttle leaving.

The big hurry may have increased their discomfort, Ruth thought to herself. However, it’s good for them to stop thinking of me as a package that needs to be moved around. This package has legs, and they can lead, follow, or get out of the blasted way.

Walking through the doors of the ForceX Bar still gave Ruth the shock of going from full light to almost complete darkness. At least at this point, it was a known feeling. Pausing for a short moment to get her bearings, Ruth was nearly overrun by one of her security detail.

Smiling at his muttered apology, Ruth walked over toward the bar and called out, “Hi Luka! I hope you have started to stock the better liquor because I really could use a drink and I don’t want to drink any wimpy stuff.”

The bartender let a hearty belly laugh loose and reached below the bar to pull a bottle and several glasses. “Hello, yourself. I suppose we should be honored that the Lady Mage is visiting us.”

“Only if you want me to drink you under the table at the insult,” Ruth replied.

“No, no. Anything but that! Think of the terrible things you would do to my reputation if I allowed that to happen.”

“Then you better not give me any further snobbish words, because we are here for good companionship and drinks before we have to take off for home again.”

“Obviously, you’re going to need some people to drink with you. It wouldn’t be any fun to drink by yourself, and I know better than to try to tempt your bodyguards.”

“I suppose you’re right. Do you have any recommendations for someone who’s not going to get freaked out by drinking with a non-Marine? Preferably, someone who won’t hit on me.”

The bartender chortled and looked around the room, making a show of his slow perusal. There were very few people sitting in the bar at that point, but the Mage made special note of several of them. Out of the corner of her eye, she noticed that Jenna had stiffened when she had seen two of the same three that Ruth had marked.

Ruth heard Jack, Jenna’s AI weapon, say, << Isn’t that the Major? I thought he was acting more like a hermit these days instead of drinking at a bar. >>

Jenna replied silently, surprising Ruth because she very seldom did that when the Mage was around. In a quiet mental voice, the former Marine said, << Yes, if you think that it is Major Alan Culhane. >>

<< OK. Now you can explain to me why that dimwitted excuse for an officer, Lieut. Trempal is slumming in a Marine bar. >>

Before Jenna could reply to Jack, a new mental voice interjected, << I think he was here because he had been ordered to spy on the occupants of the bar. However, when Alan and I showed up, his orders changed, and now he’s here to try to see who we might meet with and what other bits of meat he can scavenge. >>