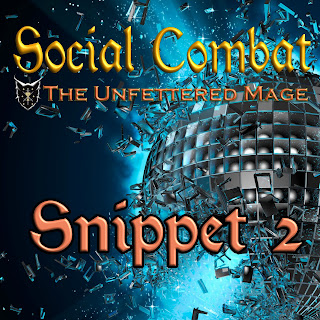 Here is another snippet from the next book in the Unfettered Mage series, Social Combat. Remember that this is unedited!!

The book is coming along well and we expect to publish next week!

Twisting and turning, the stingship attempted to cut through the trough among the buildings of the city, using the civilian infrastructure as a shield as it fled to the North. Undeterred, one of the assault shuttles peeled off in pursuit while the other one slid over on the far side of the two armored vehicles that were preventing forward movement along the street.

The remaining shuttle dropped down to less than a hundred feet above the ground, maintaining a position a hundred yards to the east of the hostile armored cars. The people in the room with Ruth were cheering as long slender ropes or cables slipped down from both sides of the shuttle, and the figures of AMF Marines in full battle armor slid rapidly down to the ground.

Quickly forming up into fire teams, a Marine with a broad portable barricade shield was walking point while behind him came two other Marines. One of each of the pairs held a heavy mobile energy weapon, while the other carried one of the new projectile weapons that Ruth had purchased for her forces.

As soon its mobile units were dropped, the shuttle rose up higher in the air and brought its forward weapons into play.

Someone in the crowd yelled, “Those idiots do not even know that anyone is there! Apparently, their pilot does not know how to use a radio.”

Ruth looked at the display, trying to see what they were talking about and finally realized that the enemies that had been advancing from either side of the street toward her trapped men had no warning of what was about to happen. A vicious snarl appeared on the Mage’s face as she hoped the next few moments would show some payback.

Just then, the AMF assault shuttle fired its forward weapons. To Ruth’s surprise, the shuttle pilot targeted the center of the jointed transport that was blocking the rear Borachland vehicle. Dazzling in intense colors of gold and red, the hungry beams lashed out, carving huge holes in the massive armored conveyance that the hijackers had brought to bear. Fires surged up in reflective fury, as the armor fractured and melted.

The splash of the energy incinerated the closest attackers. These had been repeatedly firing into the rear of the pinned transport. The speed of their disappearance was almost more than Ruth could comprehend. One second there were eight men firing weapons that were chewing through the back of the Borachland vehicle, and the next, there were only ashes blowing in the wind.