The Next Book in the Familiar Magic Series is Unfamiliar Pathways ! 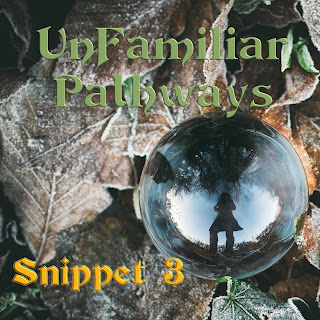 The book is coming along, with TT and Jack on a mission. Here is a snippet to remind you of the story! Please remember that this is unedited!

“Nothing yet. My scrying into that world is getting better, but it’s still very fragmented. I’m afraid that part of my difficulty is the terror that I have in my heart for our old world.”

“I wish there were something I could do, but Star Child Grace was very clear. I cannot go back.”

Zhanna’s Baba reached a comforting hand over to clasp her granddaughter’s wrist. Opening her mouth to say something, a sudden flash of light changed the color of the Seer’s eyes and her expression altered.

The voice that emerged from the old woman’s mouth was different than the smooth and warm tones that Zhanna loved. Instead, a harder, harsher sound came out, “Beware the changes. They are coming for the good and the evil. Sadness rides their coattails while destruction becomes protection. Love and sacrifice fuel their energy, fearful in its power. You will see arrivals and departures in the days ahead. Take each as if it were your loved ones’ last moment, for they tread an unfamiliar pathway. One that you cannot travel with them.”

Zhanna gasped in shock, the words hitting her like blows. A split second later, the light disappeared from Baba’s eyes, and the old woman’s unconscious form pitched forward toward the table. Shedding her chair with a force that sent it clattering to the ground behind her, Zhanna caught her grandmother in her arms.
Instantly, Dascha and several of the Hidden Folk were in the room, providing extra support and asking excited questions. Dascha pushed the hardest, demanding across their bond, << What happened? Who was talking? >>

<< Baba had a vision and a Power spoke through her. >>

After a very short time, Zhanna’s Baba roused enough for her granddaughter and the other helpers to get her into bed. The exhausted Seer was so tired that she fell asleep before Zhanna could even kiss her goodnight. Worried, Zhanna looked down at the woman she loved more than any other person in the world and noticed how frail she was.

“Don’t worry, we will stay with Baba,” said Noma.

“Thank you. Please let me know if you need anything or if something more happens!”

Feeling a fog of concerns and worries following her like a starving dog, Zhanna left her grandmother tucked in the bed, watched by Noma and another one of the Hidden Folk. Guilt and a desire to help fought with the knowledge that she didn’t have to do everything herself.

In this case, knowledge won, but Zhanna was unable to shrug off the feeling of impending disaster. Joining her, Dascha remarked, << I am very worried about that prophecy and TT. It has all the stink of someone interfering in our lives. >>