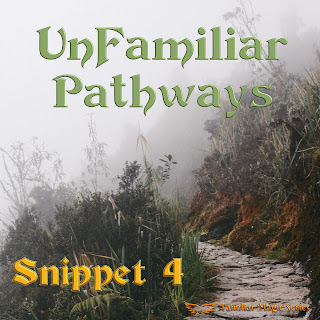 Here is the other Sunday Snippet that I forgot to post! Sorry about that, but was very busy writing. This snippet is from the next book in the Familiar Magic series, UnFamiliar Pathways. I plan on publishing this book sometime in the next few weeks, but I wanted to give you some idea of how it was shaping up!

Remember that this is unedited!
----------------------FAMM UFP Snippet 04 ----------------------------
Numbly, the men wandered around the pitted streets, unable to take in the enormity of the disaster that had occurred. Blackened timbers and crushed walls defaced every building that was even partially standing. The smell of old smoke clogged their nostrils and made them choke on the contaminated air they were forced to breathe.

At one point, a plume of ash had risen in the air, and the entire group of men had charged over in the hope that someone or something was still alive. Smashing their way through the debris that had fallen over the doorway, they arrived wide-eyed and adrenaline-powered only to find that a weakened beam had finally collapsed, raising a small cloud of the fine ash that filled the room.

One of the men had tripped, catching himself against the carcass of what had been a cabinet. Looking down to see what he had stepped on, the man collapsed to his knees sobbing as he tried to gather the bones of the small skeleton that he had disturbed. Two of his teammates helped him to rise, their own faces riven with grief.

The three of them carried their tiny burden out into the shattered square with the contaminated fountain. There the mercenaries laid the remains of another one of their friends and family at the end of the heartbreaking line of corpses and skeletons.

Motioning the men to join him by one of the vehicles they had used to return home, Peotr Tesorov rubbed his face fiercely, as if he could scrub his own tear tracks from not only his skin but his soul. Looking around at the twenty shocked and grieving faces of his men, the Mercenary Witch Commander said, “There is no sign of conventional weapons being used in the destruction of Brasilov. As far as we can tell, the carnage here was done with magic.”

“At least your father, Mayor Nikolai, fought back. The half-melted grenade launcher was fused to his bones. Most of the others were helpless,” growled Boris, Peotr’s second-in-command.

“Rolan and I found this close by the group of skeletons in the desecrated church,” offered Kasimir in an angry, deadened tone. His hand noticeably shaking, the ordinarily phlegmatic mercenary handed Peotr an object wrapped in shielding cloth. The commander raised his eyebrows at the atypical treatment but trusting his men, he laid the bundled item down and carefully unwrapped it, using the tip of his dagger.

As the last layer of concealment slid off the item, Peotr drew back suddenly with a horrified expression on his face and his gasp ripping a biting line through his chest. Staring as if he could not believe what he was seeing, the man cried out, “Blood Mages! No wonder the village had no protection, no way to fight back. My father may have deliberately fought so that they had to kill him. At least, they did not get to torture him to death.”

Boris crowded in and covered the malevolent-looking amulet once again. His eyes met Peotr’s and their gaze clung for a moment as a conversation only possible between old friends occurred. Taking a deep breath, the commander turned to his men and said, “It is possible that moving the amulet has notified the Blood Mages that we are here. We need to do what we can for the remains of our loved ones. Unfortunately, we also need to leave as soon as possible. There is no point in adding to the power that they derived from the pain and suffering the Blood Mages caused here.”
------------------End FAMM UFP Snippet 04 -------------------------
Posted by Taki Drake at 4:28 PM