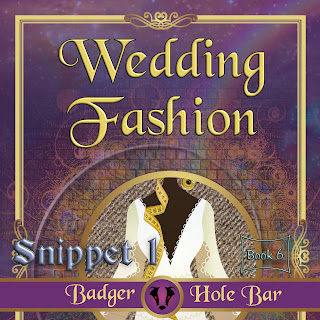 If it is Sunday, then you need to see pieces of what I have been working on! Just in case you think I am being lazy...

This snippet is from the next Badger Hole Bar book, another book about the Clothier with Kris Endicott. The book is titled Wedding Fashion.

Here is a short snippet for you! Hope you enjoy it!
-------------------- BHB WF Snippet 01 --------------------
Genevieve stood in the middle of her studio, surrounded by her assistants. A vibration and hum in the air resonated in her bones and made it impossible for her to stay still for any length of time. The Clothier wasn’t sure if her tension was in response to the ball of swirling colors that hung in the air in front of her or because everyone in the studio shared that sense of tightened nerves and pent-up energy.

Over her bond with Doucet, the woman could feel a level of gleeful excitement that was something new from her typically contained partner. His emotions were so strong that even her assistants could read them.

“Ooh, what is it?” eagerly asked Yoko, the silk pincushion. Her two back folded-fabric petals were tilted up off the cutting table a little. All of her pins stood halfway out. The ends of the pins looked almost like extended eyeballs, arranged in a fan. It was as if Yoko had eager spectators trying to see whatever was going to occur.

“Doucet, come on. You’re killing us with the suspense,” Genevieve said in an affectionate tone. “Tell us what the surprise is.”

The magical building had been hinting all week about an experiment he’d been trying based on an image plucked from Genevieve’s memories. Doucet’s constant teasing had pushed her to the limit, and finally, today, she had threatened him with not allowing further access to her memories if he didn’t share his results.

That restriction was not something that Doucet wanted to occur. In particular, the memories of comic books his Anchor had recently shared were very intriguing. In his long existence, they were a unique art form and offered him a sizeable creative scope to exercise in his chosen media.

Knowing he had pushed Genevieve as far as he could without her retaliating, the BHB Clothier Shop gave into his Anchor. Genevieve felt Doucet chuckled through their mental link, and the ball of magic in the middle of the studio began to rise and expand. Amid the misty swirling colors, a dancing fountain of water rose from the floor, ebbing and flowing as skirling notes emerged.

Genevieve put her hands on her hips in annoyance and glanced around at her four companions, who were nearly as agitated by anticipation as she. “He asks if we’re ready,” Genevieve told them in disbelief.

Gingher raised up, his blades open menacingly. “Doucet, I swear, if you do not get on with the show, I will cut to shreds that painted velvet image of dogs playing poker that you love so much.”

Yoko and Henri were silent. The pincushion had already made her opinions known. From his position around Genevieve’s neck, the French tape measure patiently waited. He knew there was probably more drama coming, but he saw no reason to add to it right now. Isaac, the old Singer sewing machine, was just as impatient as the Clothier. With a roar of his gears, he added his voice to the demand, “Torturing us does no good! You are acting like a child!”

A flash of apology slipped over the bond to his Anchor while Doucet pushed a strong force through the ball of light and into the floor of the studio.

On the heels of that force, the fountain of water split into two plumes of the pocket universe’s living water dancing and twisting around each other in a joyous display. Faster and faster, they swirled. Colors from the lighted mist around them balanced and shaped the water as the pillars grew in size. The liquid suddenly exploded as if it had hit something of substance, hidden from the spectators’ view.

The water flew everywhere. It could have soaked everything, but the liquid evaporated before impacting any surface or fabric. The suddenness of the explosion had everyone scrambling to get out of the way. The lack of wetness quickly stopped their reactions and made them feel both foolish and furious.

A general outcry happened, and Doucet murmured, << I’m sorry! >> over and over again. When the furor died down, Genevieve demanded, “What were you thinking? That could have been a disaster!”

<< In all your memories, this type of unveiling was accompanied by the teasing for days ahead of time and for something dramatic when you finally saw your gift. I just wanted to give you something that would match those special times. >>

<< Your birthday, of course! This is your present, and according to your memories, everyone is supposed to tease you about what you’re going to get and then stage some dramatic show. >>

Just then, all of the living water vanished, and the last of the brightly colored mist disappeared. Where the whole showy spectacle had been, there now stood a bolt of black fabric laying flat. About a yard of the cloth was unwrapped from the rest and lay draped across the studio floor.

The completion of the extravagant light show was an abrupt shock to the senses. It felt to the Clothier like a boisterous party had just left the room, leaving a profound silence. The dark, somber color of the textile lying on the floor pulled everyone’s eyes. There was no sparkle or shine to the fabric, a deep cavern of shadow made physical.

The Clothier stood motionless, stunned in surprise, and for once wordless. She felt shocked to her core, with waves of hot and cold sliding over her skin and rapid changes. Genevieve could sense the concern from Doucet over their bond, but the stunned woman was incapable of any response.

Henri’s voice was raised, sounding shocked and trembling a little bit. “Madam! Why did we not know that it was your birthday? Are we not your assistants? Never would we have insulted you by forgetting to celebrate a milestone in your life. Please forgive us!”