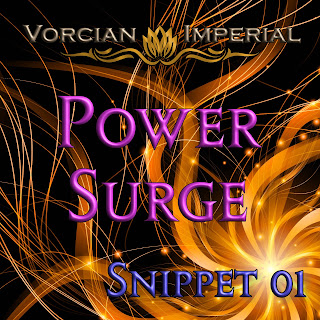 It is Sunday and time for another snippet! I am working on several books right now, one of which is the next book in the Vorcian Imperial Chronicles, titled Power Surge. This is the third book in the series. It continues the story of Corda Devlin Watern, a student at the Barkin Prime Academy.

Remember!! This is not edited and may be altered before publication.


-------------------<<< Snippet 01 VIC PS >>>-----------------------
T’Kini, the Nyri Mage, completed her report and leaned back with a sigh of relief. The reptilian woman wore robes with the medallion of a full member of the Imperial Citadel Academy gleaming softly against her chest. Like all of her species, a distinctive brush of dappled, lustrous hair ran from the crown of her head to the base of her skull. Braided and coiled, her luminescent hair would have hung below her waist if brushed out.

The darkened room was a comfort to the exhausted woman’s eyes, and she appreciated the consideration of the Academy Cadre. The five people present were the strongest and wisest of those that had graduated from the ICA. The fact that they had met with her immediately upon her arrival told T’Kini that they understood the importance of what she had seen and experienced.

“I have several areas of concern, which are probably shared by everyone in this room,” stated B’Getha. The ancient Mage was the other Nyri in the room and had headed the Academy Cadre for the last hundred and twenty years. Her still-powerful voice resonated with both her emotion and control, as she said, “The idea of a rogue group within the Imperial Military Intelligence is hugely alarming. Especially since they were able to mount an attempted extraction of the initial infiltration survivors so quickly.”

Halberd of Halisert, the Urisian member of the Cadre, rumbled in his deep voice, “They need to be an extremely well-funded and well-connected splinter group for such a prompt and well-armed effort. I think we should quickly bring some of the Nyri peacekeeping and regime forces into an informal discussion of this situation.”

B’Getha nodded her head in acknowledgment before she continued, saying, “I find it also extremely disturbing that the Seer’s visions of multiple decades ago were a surprise to us. I thought our intelligence gathering was better than that. Perhaps, it is time we see about collecting more information on signs of contingency planning and other Foreseeing activity within the Emperor’s court.”

Trenton Madigan, one of the human Mages of the Cadre, pinched the bridge of his nose and closed his eyes in a pained expression. Almost mumbling, the man said, “When T’Kini sent her early warning message, I immediately checked to see if any of our Seers had foreseen any of this. I asked them about unusual patterns or warnings of either a major threat to the Imperium or the events that just occurred on Barkin Prime. The answer is we have no recorded hint or emerging pattern that touches on either area.”

Murmurs of shared worry sounded from around the room, but T’Kini interjected with a surprisingly serious note in her voice. “The strength of the Imperial Seer is unlike anything else I have seen. Many times have I been around Mages when they have been scrying or in the grip of their magic. Compared to Misha Bellee Gerson, their command over their power is like comparing ripples from a flung pebble in a small pool to a tidal wave.

“I think whoever has formed this rogue MI group will rue the day that they attacked Misha’s granddaughter. The power of her fury almost had me hiding. That was the first time I have ever felt frightened in my entire life, and it taught me an important lesson about hubris.”

Well acquainted with the very talented Mage, the Cadre stared at her with open mouths. An observer would have seen the impact of that statement in the calculation behind each Mage’s eyes as they realized that a war had been initiated.

B’Getha somberly said, “I, for one, am glad that we have declared on the side of the Imperium and the Seer. We need to provide what support we can to our allies in this, lest these rogues destroy what has taken centuries to build.”

Nioni Edan, the Mage who oversaw all classes at the Academy, asked, “What can we do? Perhaps offer a place for Misha’s granddaughter here?”

Halberd said immediately, “No. That will do nothing but divide the people that must learn to work together on Barkin Prime. Instead, I suggest we offer an instructor exchange for the upcoming year. That will allow us to place someone on the staff of the Barkin Prime Academy to train both instructors and students into some of the forms of magic that are not normally offered there. Also, by being an exchange of styles and skills, our students could benefit from understanding other ways of looking at magic.”

“What a wonderful idea!” B’Getha offered immediately. Smiles around the table showed that the entire Cadre was in agreement. Nioni immediately asked, “Which instructor would you recommend?”

Stretching his massive 7-foot-tall and broad-shouldered shape out into an intimidating display of fur, fangs, and claws, the Urisian Mage smiled broadly and said, “Me, of course.”

In the rapid flurry of conversation that immediately descended, B’Getha heard T’Kini mutter to herself, “I need to go also. There is some hunting I must do.”
The old Nyri Mage smiled as her former apprentice appeared to slip into a light trance. The expression on the younger woman’s face was familiar, and B’Getha knew that one way or another, Barkin Prime Academy would never be the same again.