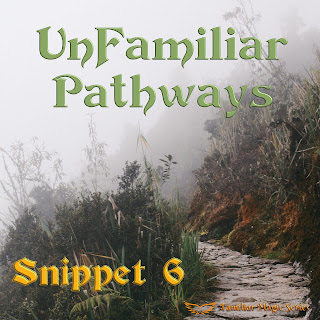 Time for another snippet! This one is part of the next book in the Familiar Magic series, titled UnFamiliar Pathways.

Remember that this is not edited! I thought you might like some insight into how the plot is unfolding!

Jehani was conscious of his fur moving in nervous, swirling patterns. The young male cat was on the edge of emptying the contents of his stomach onto the ground and had no idea why.

Looking around, he saw that the rest of the clowder seemed to be hanging on every word that fell from the lips of the aristocratic Witch. Rosemary d’ Reauvrey, the premier Which of Paris sat in a pool of sunlight. The golden glow intensified her angelic appearance, turning her hair almost into a halo.

Valentina and Borial were perched on a cushioned block next to the chair that the witch had taken. The silvery female Persian had an adoring look in her eye, and Jehani’s nausea increased as he saw how little intelligence was showing from the supposed leader of their clowder.

Borial was not much better, and the young male cat was conscious of a deep feeling of betrayal as he saw that the impressive looking male head of the clowder Council was bobbing his head in agreement with every statement that the blonde Witch made. I have looked up to him since the day my eyes opened. How could I not notice how subservient he was to any Witch that visits, he thought to himself.

Jehani kept watching, trying to figure out the source of the cloud of gray mist that surrounded the Parisian Witch. Ever since the woman had entered the clowder, the cloud had gotten darker and started to extend further away from the woman.

At first, he had thought that his eyes were playing tricks on him. Jehani had been warned many times about confusing the skills of a Familiar with those of a regular Witch. All of his instructors had told him that he imagined things, some of them going as far as to accuse him of prevaricating to make himself seem more important. After a while, he had given up telling anyone what he saw.

Given that background, there was no one that he could speak to about the cloud that he saw, nor anyone that would willingly listen to him talk about how the Witch’s presence made his fur crawl and his stomach turn over. It was like a bad smell that no one else could detect. If only Jack were here, Jehani thought to himself. I know he would believe me if I told him what was going on.

Jehani felt conflicted. He was worried and nauseous to the point of wanting to run outside. Seriously considering leaving the room, the young cat froze in place as he saw what looked like a dark arm of the cloud reaching out from the Witch to touch one of the cats closest to her.

The calico Persian that was covered by the gray cloud was Xaleena, an energetic and bright young cat. She had been relatively subdued since Jack and TT had disappeared, but she was a valued member of the clowder.

Watching in growing horror, Jehani saw threads of what he thought was magic slipping through the greyness of the mist and entering Xaleena’s body. Going in as thin ribbons of glowing light, when the bright streaks reappeared, they were thicker and more intense as they slithered back to the Witch and entered her body.

The young cat’s eyes whipped back to look at Xaleena, only to see that her strong aura had dimmed down to a muted hue. Taking in her suddenly drooping head and the dulled light in her eyes, Jehani realized in terror that the Witch had stolen energy, even a portion of the unknowing feline’s life.

No one will believe me if I tell them what I have seen! Jehani thought. The young male felt like the jaws of a trapper closing around him and the rest of the clowder. Unable to think of anything that he could do, the adolescent cat began to ease his way toward the doorway. He knew he had to get away.

Jehani was only a few feet away from the door when the conversation of Valentina and the Witch suddenly slammed into focus in his mind. Horrified, he heard Valentina suggesting that the Witch might like to see the latest crop of kittens! Even from the distance that he stood, the adolescent cat could see the search in the Parisian’s aura.

Flashing with greedy tendrils of red and yellow edged with black, they formed a visual pattern of the lust and greed that threaded through the words of the Which Rosemary, as she said, “I think that would be a lovely idea. Perhaps, by seeing them earlier in their lives, it would be easier to determine who might be both a capable and longer-lived familiar for me.”

Valentina replied, “Of course, the quality that the Familiars from this clowder provide is unsurpassed!”

Unable to fight his nausea any longer, Jehani slipped through the doorway and stumbled off to the side, so he was out of sight. Bending over, the adolescent cat helplessly regurgitated the entire contents of his stomach, leaving him shaky and weak.

Thoughts spun in his mind, desperate ideas of denouncing the Witch or finding someone who could stop her. Panicked and friendless, the young cat was frozen until a sweet, young voice asked, “Jehani, are you okay? If your tummy is upset, I know where there are some of the plants that Mama gives me when my tummy hurts. I could go and get you some.”

Lifting his head with bleary eyes and aching throat, the adolescent cat looked up to see the bright, glowing aura that surrounded the young kitten, Meko.
Unable to take his eyes away from her gentle eyes and caring expression, Jehani felt something click into certainty within his body. Suddenly determined and resolute, the adolescent male cat straightened up and said, “She will not get you! I do not care what it takes, but you will not be sacrificed!”