It is Sunday and time for another snippet! I am working on several books right now, one of which is the next book in the Familiar Magic series, titled UnFamiliar Pathways. 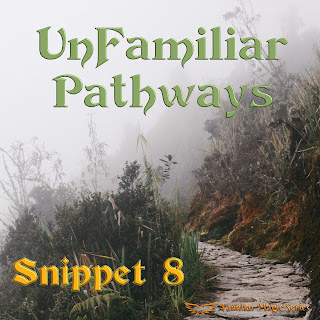 Recognizing Perun’s sign, the old Seer watched in amazement as the bent and angled arms of the symbol appeared to snap off, separating from the center wheel-like hub. Each of the outer pieces began to glow in different colors. Glyphs appeared on each one, radiating a powerful golden light.

Counting them quickly, Dochin realized that there were six of them. Although unusual for most kolovrots, the Mongolian woman knew that the six-armed version stood for balance and cooperation.

I can see where this is appropriate, she thought to herself. After all, I am looking for six Magic users. Each of them has a different strength and a different approach to the use of Magic. That would mean that each will be marked with the type, and that is probably what forms the glyphs. Witch, Mage, Wizard, Priest, Sorceror, Healer. Every one of them will be needed.

Convinced that she had found her tokens, Dochin poured her energy into the next stage of the ceremony. Pungent smoke filled the air as Ganbold lighted a series of different grasses. Swirling winds of sage and other sweet herbs filled the Seer’s nostrils and energized her.

Chanting aloud, Dochin let her words fly from her mouth into the bowl, soaking into the surface of the tokens. Speaking of sacrifice and possibilities, the old woman entreated those that would take up the burden to gather Familiars and Hidden Folk, taking critical apprentices and journeyman with them. She warned them that her visions showed that only if they joined with Zhanna would they survive and thrive.

The old woman could feel her body start to fail, and she pushed harder, sending messages of where her vision had shown the different beings joining together. Black spots floated through her eyes, and she felt her chest ache as breath came with increasing difficulty.

Knowing that she only had a few more seconds, Dochin flung her hopes and fears into the tokens, trying to give each of the fated bearers as much support as she could.

As her consciousness trembled, the old Seer saw flashing glimpses of Rovers, travelers that lived a nomadic lifestyle. She also saw swirls of horses, cats, and dogs, all congregating for a great exodus. Last of all, she saw the face of a roughhewn man, and a massive hound leaned against his shoulder. They were seated on a wagon, in transit to someplace. Intuitively, Dochin knew that he was a central actor in the stage of life on which they were cast.

Desperately trying to hold on, Dochin knew that she was exhausted and drained. Her attention wavering, she could feel the power of the bowl starting to dissipate when Ganbold cried out, “I see Bolormaa and Zhanna in a garden!”

Releasing her hold on her vision and the bowl with relief, Dochin sagged against the table and raised streaming eyes to Ganbold. She can tell that the young Seer was caught in his Sight. His eyes were glowing, and a strange light outlined his figure.

Dochin struggled to speak but stopped her efforts when Chimeg asked, “What else do you see?”

“The flowers and the plants in the garden are strange. I have never seen anything like them. The sky is a different shade of blue, and the plants have strange-colored foliage, purple, teal, and pink. Both the women look happy, and Bolormaa has three little ones in her lap. The small ones are all Hidden Folk, and the Seer is smiling as she strokes them gently.

Dochin found her voice finally, saying, “At least one of my daughters is safe. Thank you for telling me.”

The next instant, the old Seer almost slipped from her chair, and both Ganbold and Chimeg leaped to hold her. Before they could call for help, Geriel came into the room with a wild look in her eye and trembling hands.

Immediately, Chimeg demanded, “Geriel, what is wrong? Why do you look like you are both scared out of your mind and excited?”

The trembling in her hands increased as the Healer held an object out in front of her. Glowing with intense blue light and decorated with a blinding gold glyph, both young Seers were astonished to see the token they had last seen a few moments before in Dochin’s bowl.

What Geriel was holding in a grip both shaking and firm was the token for the Healer.