Another Snippet in the Unfamiliar Pathways book! 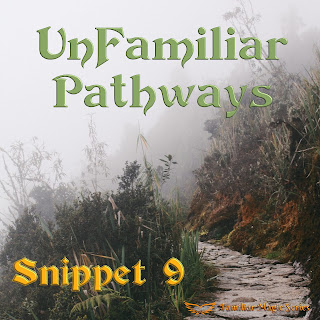 It is time for another snippet! I am working on several books right now, one of which is the next book in the Familiar Magic series, titled UnFamiliar Pathways.

There was a groan from one of the guards, and a curse from the other one. Grabbing her bow and one of the arrows that lay in a convenient quiver strapped to her saddle, Chimeg turned toward the sound of the threat.

The young woman had her arrow knocked and her bow ready to fire by the time her body had spun around, but she immediately lowered the bow as she saw two women pulling to a coordinated and controlled stop amid the milling horses. Glancing over at Geriel, Chimeg was not surprised to see the Healer openmouthed with astonishment.

The two unknown women that sat comfortably on their sturdy horses were very different but equally composed. One was obviously a warrior, dressed in the distinctive metal topped hat, chained protective shirt over a padded undercoat, and bloused trousers tucked into fur-edged boots. A sturdy pack animal stood patiently behind her, with no visible leading rein.

The other woman was much younger, not much older than a girl. Her hair caught in braids and head topped with a circular fur hat, she wore a horsehide jacket with a broad leather and metal belt. A prominent bag lay against her thigh.

However, the way the younger girl was dressed was not what drew the eye and made the watchers gape in surprise. It was the huge black Eagle that sat in upright splendor on the young woman’s right forearm. It had its enormous talons closed around her padded and protected limb, and the colossal predator turned bright and knowing eyes to examine each person in the area.

One of the guards was the first to find his voice. Yanking his mount around to confront the woman warrior, he demanded, “What are you doing here, woman? I do not remember inviting you!”

She replied in a resonant contralto, keeping her voice even although the spark in her eyes warned Chimeg that this was a true warrior and would not tolerate disrespect. “I am here, Temujin because this party has two women as leaders. Men cannot guard women as well as we can. If you are going into danger, you need all the help you and Ganhsuk can get.

The guard protested again, “You have no right to be here! Return to your family and the village where you belong!”

“That is enough!” The words ripped through the air, freezing everyone in place, including the young Journeyman Seer that had uttered the words without thinking. Carried by a rush of anger that felt like fire along her nerves, Chimeg stalked over to the suddenly pale-faced guard and demanded, “Who are you to give orders for this party? The Healer asked you to accompany us. She did not tell you to try to boss everyone around, did she?”

When the man opened and closed his mouth several times without uttering any words, Chimeg reached up and grabbed his belt, yanking him off his horse to clatter onto the ground. Leaning over him to demand an answer, she ground out, “Did she?”

“No, what?” snapped Chimeg, letting the fury she felt show in her face. The other male guard had dismounted and walked over to Chimeg with a rolling gait of a born horseman. “What Temujin would say if you had not just scared him out of ten years growth is that we understand that you and the Healer are in charge of this journey. I am positive that he will not make this mistake again.”

Chimeg asked, “And what about you, Ganhsuk? Will you willingly obey a female leader?”

Offering her a formal salute of a warrior to the khan, the ax bearing fighter said with a contented smile, “I am very pleased to serve you.”

Turning her back on the two men to stalk over to where the two women waited warily, Chimeg looked at the female warrior and demanded, “Are you here just to provoke Temujin, or are you sincere in your desire to come with us? Do you realize what it is we are going to do, and the dangers that are associated with it, or are you so anxious to prove yourself in a battle that you will take any opportunity without considering the risk?”

The warrior clad woman broke into a broad smile, cheerfully saying, “I have considered the risks, and I had a long talk with Ganbold yesterday about what it entailed. Although he is more than a little frightened of what you have to do, I would like to be part of the effort to save at least a portion of our heritage. It matters not to me where we go or who we fight. Instead, I look for someone to take my allegiance, a person who is worthy of my honor. Someone who will lead and understands the responsibility of that leadership.”

Tilting her head to the side, Chimeg stared at her and asked, “What makes you think that I am such a person?”

Smiling so broadly that it looks like her face was going to split in two, Batsorig answered, saying, “You came back and stopped Temujin in his unthinking male attempt to take over. Then you were equally willing to kick my butt if necessary. There was no condescending behavior from you directed toward either one of us. Your questions were strong, and I can tell that you have fire in your soul, Yes, I believe you are that person.”

Very clearly from behind her, Chimeg heard Geriel mutter, “Crazy people! I am surrounded by crazy people!”