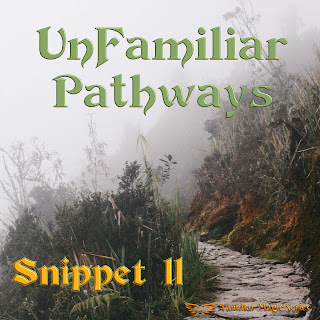 It is Sunday and time for another snippet! I am working on several books right now, but the one on the last chapters is the next book in the Familiar Magic series, titled UnFamiliar Pathways.

Khan Oktai’s mental voice answered her thought, saying, << Probably for the same reason that very few people have heard of Familiars that are raptors. This world does not have much of a place for our kind any longer. >>

<< I do not understand how that can be true. Everywhere I look right now, the Familiars are helpful. And looking back at my life, I can see where the Witches I know would all have benefited and been thrilled to have someone closer than a friend and intertwined in their Magic, >> Chimeg answered.

<< The situation is made worse by the lack of qualified Russian Witches. Since Familiars will not bond with any Magic user that has slipped over into the darker uses of their Gift, and many Magic-user lines have lost the means or knowledge of maintaining their own honor and ethics. There simply are not many Witches or Mages left in this world that can bond with a Familiar. >> With that one last comment, the massive Black Eagle sprang into the air and headed out on his planned sentry sweep.

Chimeg knew that this was his periodic check to see what lay ahead of them, as well as a double check to detect any long-range pursuit that might have started. The young party leader felt more comfortable knowing that the big Familiar had taken responsibility for this aspect of their safety. However, she believed this subject needed to be reopened again, and soon. An amorphous sense of pressure and dread told her that it was important to continue the discussion, and any delay would be dangerous.

Muttering to herself, the young Journeyman started to think about the force that was driving her, realizing in a flash of insight that they needed to get to their goal quickly. At first unsure of why, Chimeg cast her mind around, trying to perceive the source of the warning. The young woman only had a split second of warning before a vision crashed into her, swamping her senses. A swirl of partially seen images surrounded her as she was pulled down deep inside the River of Time with only enough time to issue one incoherent mental alert as the familiar wrenching feeling of a Timedive overtook her.

Spinning and twisting in the familiar, but still frightening waters of the River of Time that ran through all aspects of time and choice, Chimeg concentrated on maintaining her sense of self. She knew from her training that without a clear boundary, a Seer would quickly be lost in the illness that inevitably killed all of their kind. Dochin had taught her well, so her practiced discipline kept her from fragmenting as the Timedive dipped her into the chaos of the River.

Focusing on sensory input that anchored her to the current reality surrounding her physical body, the young woman replayed the feelings of how her body stretched and moved during her ride, as well as the pungent smell of her horse and the sound of the Eagle Familiar’s takeoff. With these landmarks to help her, Chimeg managed to center herself well enough to take in the images that flashed with importance as they slid in front of her spectral vision.

Scattered among the fragmented glimpses of unconnected events, the young Seer managed to grab many of the fragments that glowed with the unique light she had learned to recognize as indicators of importance. Now bombarded with those pictures that she had saved, the Seer felt bruised and pummeled.

Chimeg dug deep inside of her core, mining her spirit and her strength of will to successfully navigate the minefield that she had ingested. Holding on with determination, and fighting the weakness of her body and doubts in her own ability, the young Journeyman fought the barrage to a standstill. Clutched into her insubstantial hands were a small number of unmoving images that would provide her guidance and clues on what lay ahead.

Her spirit body shook with exhaustion, and Chimeg could feel her heart stuttering and the rasping of breath in distant lungs. Frantically, she pieced the stabilized images together until, with a sudden flash of intense light and a loud snap of sound, the partially-seen images coalesced into a coherent message.

Feeling like she had been stabbed to the heart, Chimeg screamed at the top of her immaterial lungs, “We have to be there in three days! How are we going to make that distance?”

As soon as the tortured words ripped out of her throat and exploded into the strange atmosphere, Chimeg felt two large hands reach up from within the ground and grab her ankles, beginning to pull her down. Twisting and turning, the young Seer fought against an enemy that she had never encountered before. Frightened but unwilling to even divert one erg of energy or sliver of attention from where she was fighting for survival, Chimeg screamed, “Help Me!”

As the massive hands yanked her forcibly into the dirt, the young Seer felt a smashing entry of someone that she knew intuitively was her ally. Large arms swooped around her and brought her to cradle against a massive chest. A rumbling voice in her mind said, << I have you! >> before the exhausted Seer began to slip into the cushioning embrace of exhausted sleep.

Just as she lost consciousness, Chimeg’s body thrummed with the sound of a massive snarl. Comforted, rather than terrified by the reverberation, the young Seer’s fading senses brought her a powerful voice, roaring, “You shall not have her! She is mine, and I am hers!”