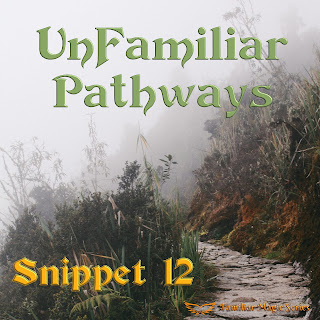 It is Sunday and time for another snippet! I am deep into the finish cleanup of the next book in the Familiar Magic series, titled UnFamiliar Pathways.

This story was planned for release today, but it will be another day or two. I do not want to send the manuscript out without following our quality checks, because I feel that it is disrespectful to my readers.

Remember!! This is not edited and may be altered before publication.

The discussion with Zhanna and Bolormaa had gone well. Neither woman had argued with TT’s plans or desires. Instead, they offered suggestions and guidelines, as well as a variety of assistance. The Seer told TT that she would check to see what her scrying bowl showed her about possible opportunities and dangers. At the same time, the young Witch promised to travel to the BHP and bring items that would possibly assist the Clothier in the construction of protective armor for Jack and the younger Persian.

The young Persian left that discussion feeling supported and loved. Her eyes burning with unshed tears, TT looked over at her friend, Dascha, as they paused by the portal that led to the BHP. Awkwardly, TT said, << I have not mentioned this enough, I know. However, I am honored and have been blessed to have you as a friend. If this is the last time we are together, please realize that you will hold a place in my heart until I draw my last breath. >>

The look in the eyes of the black Familiar spoke volumes, but her comment was typically snarky, << Only till then? I would have expected to have that spot reserved for several lifetimes, girlfriend! You need to work on your gratitude arc! >>

Choking on her own laughter, TT turned and walked into the portal, knowing that her friend understood. As the cat’s foot broke the plane of the doorway, she felt the familiar feeling of rushing through along to the twisted and turned until, between one step in the next, she was walking from a protected courtyard in Blagogarsk and striding into the warmth of a busy bar.

Waiting for TT were two smiling people. One was Madrik, the Anchor of the BHB, and one of TT’s favorite people, the warm and welcoming waitress, Wynn. It was the woman who broke into speech first, saying, “Welcome back, TT. I am so pleased to see you again! Are you here for something specific, or are you chasing after Jack?”

<< Yes, to both. I have several specific errands, but I am also chasing after Jack, >> answered the Persian.

Before either Madrik or Wynn could say anything else, a familiar mental voice intruded, asking TT, << Hello, Princess. Rumor has it that you and that old reprobate of an uncle are going to be making a rescue run back to our former home. Is that right? >> It was one of the Mercenary Guild members that had been initially part of a mercenary company under Dov that was voicing the question.

Surprised, TT answered, thinking that there was no need to keep there plan secret. << Yes, we are planning on going back and collecting whoever has managed to get to Paris for a final rescue run back here. Both Jack and I have been haunted by dreams of those that we left behind. While Jack sees it as his guilty conscience, both Bolormaa and Zhanna think it is a message to us from a deity or at least some higher power. After careful consideration, we decided that it is reasonable for us to attempt this. >>

The man turned to the others at his packed table, putting his hand out with the palm up and saying, “I told you, boys and girls. Now, pay up!”

The other men and women at the table laughed and began to lay money into his open palm. Still wearing a broad grin, the man turned back and asked, << Would you accept several people to go with you? >>

Startled, TT peered closely at the man’s face and saw shadows the same fears with which she had been dealing. Even from halfway across the room, she could feel the burden of guilt that lay on his shoulders, continually battering him with questions like, “How could I survive and escape when so many others died or have no chance to live?”

The Persian’s throat caught with a swallowed sob, and she murmured, << You do understand how dangerous this is and that anyone that goes has a good chance of being severely injured or killed? >> When the man nodded wordlessly, TT responded, saying only, << It would be helpful if we had a couple of humans to go with us. As determined as we are, at the bottom line, we are cats. No opposable thumbs and without a voice that most people can hear. I tell you, it significantly cramps my style! >>

The mercenary Witch immediately said, << My name is Fyodor, and I want to go with you. I keep dreaming about two members of our company that stayed back in Brasilov. I keep picking up feelings of fear and pain from them and hope that somehow they can get to Paris. Whether they make it or not, I can at least feel like I have done my part. >>

<< Welcome Fyodor. I need to go to the Clothier and talk to her about some protective armor. I believe that Jack and I will be ready to go within another day or so if that is possible for you. >>

Smiling, the mercenary Witch answered, << That is perfect. It will give me plenty of time to arrange for supplies for us and get them packed in a reasonable manner. >>

An abrupt movement at the bar startled TT and drew her gaze. A massively built man in the undress uniform of the new Mercenary Guilt had come to his feet and was striding back toward where the Persian cat was talking to Fyodor. Reaching the cluster of people around TT, the man completely ignored Madrik and Wynn. Locking his eyes on TT’s face, a gravelly mental voice said, <<Gennady Igorovich Kalinin. I wish to go also. >> Then as if tortured, the man added, << Please! >>

In a private aside to TT, Fyodor whispered, << Gennady never volunteers for anything! He is immensely powerful but as quiet and stubborn as the Earth. >>

Equally softly, TT asked, << Is he an Earth Elemental Witch? >>

TT began to reply, planning on putting the man off, but then she saw the horror and the buried agony that shattered into shadows behind his eyes. Despite her best intentions, TT heard herself say, << Then, you may come with us. Welcome, Gennady, to what may very well be a suicide mission. >>

Posted by Taki Drake at 8:21 PM No comments: